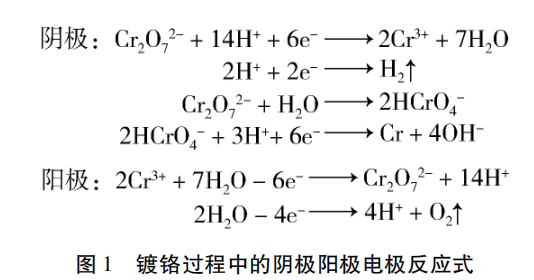 In Cr (VI) electroplating process, due to the current efficiency of cathode is only 10% - 15%, and the insoluble lead alloy is used as anode, a large amount of hydrogen is generated at cathode and oxygen is generated at anode. When these gases rise to the liquid surface in the form of bubbles and release into the air, they carry a large number of chromium containing droplets and form fog like pollutants, as shown in Figure 2, commonly known as "chromium fog".

This kind of chromic acid discharged with chromium mist accounts for 20% - 40% of chromic acid used for chromium plating according to different working conditions. The production of chromium fog will not only cause a lot of loss of chromic anhydride, but also seriously affect the health of workshop workers due to the strong corrosiveness of chromic acid. Trivalent chromium uses chromium chloride (CrCl3) or chromium sulfate [CR2 (SO4) 3] as electrolyte. Although Cr (III) process has the characteristics of low concentration, wide range of current density and low toxicity, it is easy to produce pinholes and cracks due to its poor tolerance to impurities, and Cr (III) may be oxidized to Cr (VI) to pollute the electrolyte during the electroplating process, The trivalent chromium Cr (Ⅲ) process was applied in industry. At present, although trivalent chromium Cr (Ⅲ) process is developing rapidly, the mature hexavalent chromium Cr (Ⅵ) process is mainly selected for industrial chromium plating.