3M company developed perfluorooctyl sulfonate (PFOS, trade name fluorad) as chromium fog inhibitor after commercializing Simons electrochemical fluorination method in 1950s. In particular, FC-95 and FC-98 surfactants have good chemical stability and surface activity in acidic medium. When they are used in chromium plating bath, they can form stable bubble blanket on the liquid surface, so as to reduce chromium mist and discharge, The chemical components of the above two products of 3M company are potassium perfluorooctanesulfonate (PFOS) and potassium perfluorobutylsulfonate (PFBs). Potassium perfluorooctanesulfonate is widely used because of its excellent surface activity.

In 2009, PFOS compounds were added into the Stockholm Convention and identified as persistent organic pollutants.

The abbreviations and chemical structures of several chromium fog inhibitors are shown in the figure below. 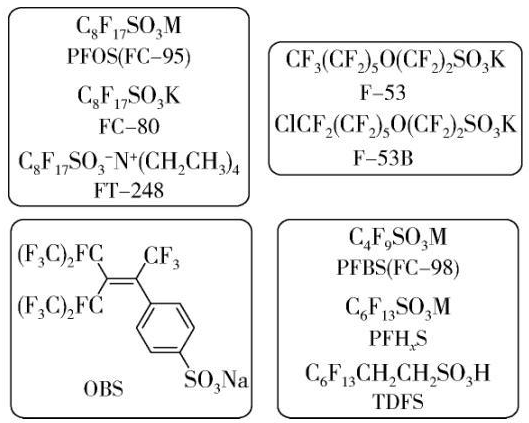